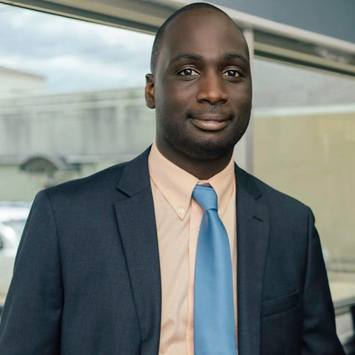 About John
​John Kerry, a native of New Orleans, Louisiana, truly embraces the Thibodaux lifestyle. After graduating from Nicholls State University in 2010, John became involved with numerous community organizations and businesses. His enthusiasm and creativity illustrates his passion for the city of Thibodaux, and his humble and kind attitude shows that he do his work for recognition. This is John’s journey.

The Journey
After John moved to Thibodaux in 2005, he knew he was home. As a government and psychology major, he always had an interest in politics, but had not found his love for the consulting and campaign business. He said, “I was blessed enough to participate in political campaigns and internships throughout college. I knew then I wanted to focus on the business side of campaigns. This made me multifaceted and diverse going into the real world.” In 2011, he formed “Conservative Nation,” now known as “Kerry Consulting Group, LLC” a
​business-consulting service whose goal is to create competitive strategies for personal, business, and economic success. Jennifer Hebert, John's long-time business partner said, "All I can say about John is – The Best Move I have done for myself and my Businesses is partnering with him!" Awesome Man all around." John’s networking skills and shining personality led him to be selected as the newest Thibodaux Main Street Executive director.
Thibodaux Main Street
This May, John was selected as the Executive Director of Thibodaux Main Street. Thibodaux Main Street works to beautify and create a hub for the arts, events, shopping, and dining services in the Thibodaux area. Thibodaux Main Street also works closely with local businesses promoting them within the community. There are 34 main streets in Louisiana, and Thibodaux Main Street is one of them!

Thibodaux Main Street is a non-profit organization dedicated to promoting Historic Downtown Thibodaux and is accredited by both Louisiana Main Street and The National Trust for Historic National Main Streets.  Kerry said one of their main projects is the beautification of the courthouse square.  “Be on the lookout for new benches and planters. We also hope to have downtown covered with cameras by October of this year.” John stressed the importance of marketing Thibodaux to visitors as well as members of the community. “We are not an event-based organization, but we do work to bring tourists and the community into the downtown area.” With over 40 teams serving cajun-inspired dishes, “Big Boy Cookoff” takes place each November kicking off “Thibodauxville,” the city’s fall festival.
His Impact
John's involvement within the city of Thibodaux not only led him to the position he is in today, but has led him to leave lasting impressions within the community.  He stresses the importance of knowing what's going on within the community from all sides, not just his viewpoint. "I take time to ride with different police officers and talk with the people and ask what their concerns are. Its not 'my' platform; it's about what the people want." He remains involved with Nicholls State University and was selected as Alumni of the Game on September 16.

​Sydni Faucheaux, one of John's former co-workers stated, "John  Kerry - he's enthusiastic, driven, and supportive. If it involves making Thibodaux better than it was yesterday, you can count him in. We need more John Kerrys in the world!"  His pride and passion for the city of Thibodaux's success illustrate that John Kerry epitomizes the definition of "Totally Thib." Also, he shows that you do not have to be from Thibodaux to make an impact in the city.
Powered by